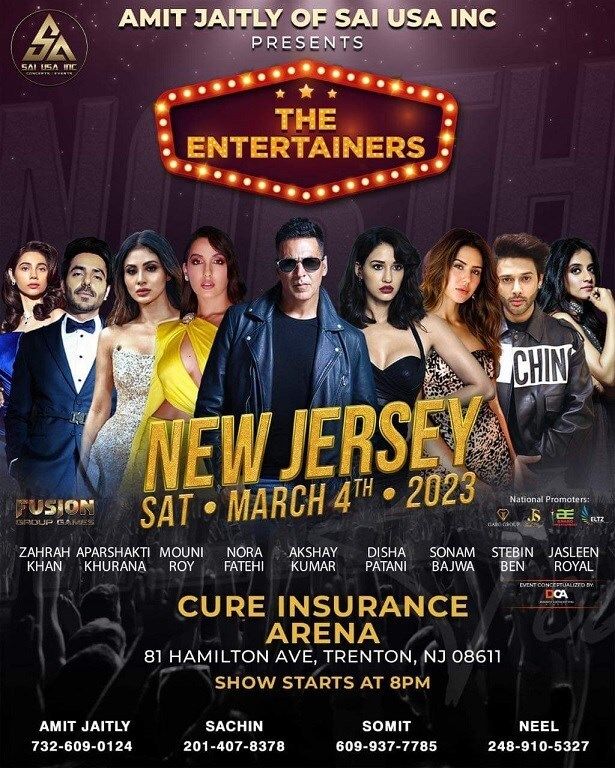 The Entertainers Akshay Kumar And Team Live In New Jersey 2023


The Entertainers - Akshay Kumar and Team Live in New Jersey 2023

Akshay Kumar
With his clean cut good looks and his training in martial arts, Akshay Kumar smoothly made a transition from action hero to a romantic hero and then into comedy, keeping movie buffs glued to their seats as they wait for what this Khiladi has to offer next.

Akshay Kumar was born in Amritsar, in a Punjabi family. His father was a government employee. Kumar was then raised in Delhi before moving to Mumbai where he studied at Don Bosco School and then Guru Nanak Khalsa College. He studied martial arts in Bangkok and worked as a chef. He then came back to Mumbai, where he started teaching martial arts. One of his students recommended him to do modelling and a few modelling assignments later, Kumar was offered a role in the film Deedar (1992) and too as the lead actor!

However, Kumar made his Bollywood acting debut with the 1991 film Saugandh, which was followed by the 1992 thriller, Khiladi. In 1994, his action films Main Khiladi Tu Anari and Mohra which were among the highest grossing films of the year. Later that year, he was seen in Yeh Dillagi which was also a success. During the same year, Kumar also had success with films like Suhaag and the low budget action film Elaan. All these achievements, promoted Kumar as one of the most successful actors of that year.

In 1995, along with his share of unsuccessful movies, Akshay starred in the third film in his Khiladi series, Sabse Bada Khiladi, which proved to be a hit. The fourth successful film with Khiladi in the title was, Khiladiyon Ka Khiladi, where Akshay starred opposite Rekha and Raveena Tandon. The film became one of the highest grossing films of the year.

In 1997, Kumar was seen in a supporting role Dil To Pagal Hai. In the same year, he attempted a comedy role with the fifth film in the Khiladi series, Mr. & Mrs. Khiladi; the film failed commercially. All his next Khiladi releases in the following years went on to fail at the box office.

In 1999, Kumar received critical acclaim for his roles in the films Sangharsh and Jaanwar. Then Akshay tried his hand at comedy quite successfully in 2000 with Hera Pheri, which was a laugh riot. His film with Shilpa Shetty and Sunil Shetty, Dhadkan, also was a good performer at the box office. His negative role in Ajnabee (2001) was well received and won him a Filmfare.

The years 2003 to 2006 saw him in Awara Paagal Deewana, Andaaz, Mujhse Shaadi Karogi, Garam Masala, and the sequel, Phir Hera Pheri. Apart from his action, comedy and romantic roles, Kumar displayed a flair for dramatic roles in films such as, Aankhen, Bewafaa and Waqt: The Race Against Time.

Akshay Kumar proved himself yet again in 2007 with almost all of his films ending up as hits: Namastey London, Bhool Bhulaiyaa, and Welcome. Though his much-hyped film, Tashan failed to do well in 2008, Singh is Kinng did exceptionally well in India and overseas. Akshay has also become a producer. The actor does not charge any remuneration for most of his movies now and rather steps in as a producer and takes a cut in the profit of the film. His company is called Hari Om Entertainment.

In the meantime Akshay also made his foray into television with the show Khatron Ke Khiladi (a franchisee of Fear Factor). In 2010 he hosted another TV show called Master Chef India. However, in the past two years, Akshay's stardom suffered as the actor saw several of his films flopping one after the other: Kambakkht Ishq, Blue, Action Replayy and Tees Maar Khan.

Kumar's Patiala House and Thank You failed at the box-office in 2011. But in the same year his